The value of a properly prepared bike

The Trance X
Let me tell you, it’s like riding on trails recently hit by an ice storm with a bike fitted with slicks instead of studded tires. At first it was ok but then I hit some really slippery mud, the first thing that happened was the tires started to slide everywhere, in particular the rear one was whipping around in the mud and going wherever it liked with very little traction. Then the sticky mud started to clog the tires, once the tires were clogged the mud started piling up at the seat and chainstays which soon started to slow the rear wheel and eventually stopped it completely so I had to get off and pull the mud out from between the wheel and frame. All the while mud was busy filling in every place it could find in the drivetrain and before long the mud works away all the oil on the chain so that the whole show starts grinding like a vintage paint mixer. If I’m really unlucky like I was this time the mud and leaves get so thick and compacted into the gearing that the derailleurs stop shifting as they should. At this point I have to give up and start walking up the trails because pedalling is pointless, the wheel is jammed so the only gear low enough to keep the wheel rotating is the granny gear but the gears are jammed too so shifting isn’t particularly effective at getting into that gear and on a normal gearing system like this I need to be moving to shift in the first place, then of course I remember that walking is quicker than the granny gear anyway….even if I had enough traction from the rear tire to stop spinning and actually start moving. When I get home to clean the bike I have to spend longer cleaning it because the mud shows up brighter on black bikes and most of the drivetrain is external and covered in mud instead of sitting in a clean and well oiled internal gear hub.

After less than a mile of riding... 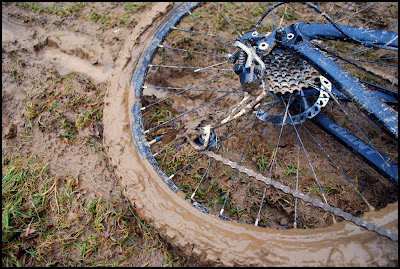 The ordinary Trance
The rear wheel with the 1.85in mud tire has only clogged up completely once all winter and even when the mud gets really bad there is no need to pedal to shift into a lower gear as shifting is instant, all the gears are internal and so won’t stop shifting in the mud and although it’s usually still faster and less effort to walk the mud tire keeps you moving rather than failing completely. When I get home on the ordinary Trance there is no need to do any more than hose the bike off and oil the chain as there is far less places for the mud to hide and it doesn’t show up on the blue and silver frame. 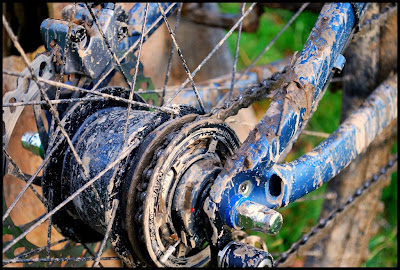 Next year I will go even further down the route to mud proof invincibility with my new Singular Swift. No gears to stop working and clean, no suspension deal with and big 29in wheels which give more traction in the mud due to more tire in contract with the ground. Riding with a properly kitted out bike for mud is much better, new tires and a change of gearing system is well worth it and has made a big difference, as you‘ve just read I only found out just how big the difference was this week.