By the name of this product it is clearly not the same as last years Julie, in fact the Julie received a full makeover for 2009. HP denotes the change from low pressure to high pressure hoses. My past experiences with Magura have been inconsistent, some good and some famously bad. As a result I’ve kept clear of Magura brakes for a few years, they should have had plenty of time to improve their brake lineup by now. 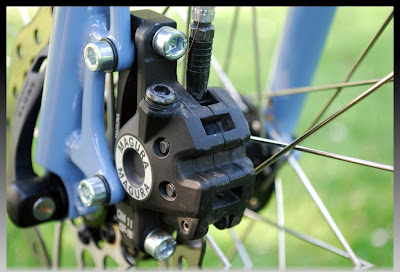 Installation
The discs were dead straight right out of the box and have stayed that way, unlike no fewer than four slightly bent discs I received from Shimano. For some reason Magura bleeds the brakes at the factory, I’m not too sure why they bother if they’re not going to do it properly. There was still some air in the system, with both levers occasionally pulling straight to the bars. Both the front and rear brakes come with 180cm hoses so they would need shortening and re-bleeding anyway. Perhaps Magura should consider bleeding them properly and offering front and rear hose length options or just send the brakes out as a kit with a bottle of oil like Shimano. The good news is the 2009 Julies have Easy Bleed Technology (EBT) and run on friendly mineral oil so bleeding is a breeze. The bolt heads aren’t as soft and easy to round as those on my Hayes Strokers. As of 2009 the various Marta, Louise and Julie HP brakes all use the same pads which are held back magnetically and with a single bolt through the tab. This makes the pads secure when riding and yet easy to change when they wear out. A very good way of holding the pads, one of the best around in my opinion. 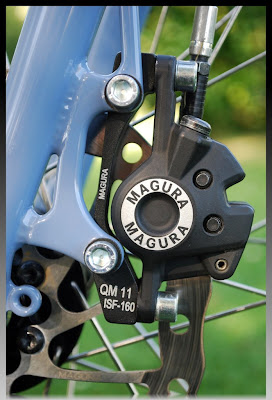 Out riding
Bedding-in the organic(6.1) pads supplied with the brakes seems to take a little longer to get the power levels up than some others. I always try to make sure the first few bedding-in rides are in dry conditions, this takes longer than in muddy conditions but gets the job done properly. The lever body is made of plastic and looks rather bulky but is actually pretty light and feels every bit as stiff as a metal lever body. The smooth aluminium lever blade is broad and might not suite everyone but I like it and the joint is flex and rattle free. Much like other Magura brakes, the feel is slightly wooden but some riders like it that way. 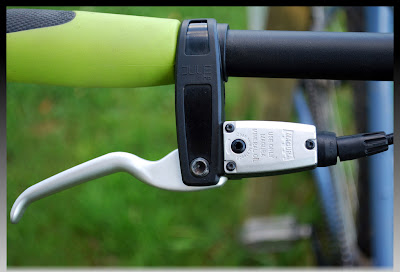 Modulation feels similar to far more expensive brakes from Hope, Hayes and Magura...perhaps not quite up there with newer Avid and Shimano brakes though. The Julie isn’t far off being as powerful as the Louise now they share the same calliper, pads and hose for 2009. 29ers require more stopping power than 26ers and I’m running 160mm rotors...never needed more power than these offer. Another new feature handed down from the Louise is the Heater Eater angle adjustable hose fitting which helps to dissipate heat. So far I haven’t managed to replicate the heat and brake fade that I’ve noticed in other brakes even after long decents. Sometimes both the front and rear brakes have suffered from a very light form of the infamous turkey gobble noise/vibration, but this cleared up after the first muddy ride and hasn't come back. They have been completely smooth and silent apart from that.
Conclusion
Any complaints I’ve mentioned above have to be measured against the price. When the price is taken into consideration, these brakes are nothing short of brilliant. 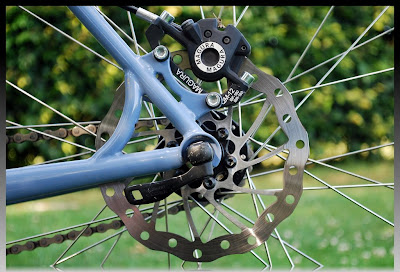