A few rides later on the 2010 Gary Fisher Paragon

That’s one ride on the South Downs, one ride around Leith Hill, one ride in St Leonard’s Forest and two local rides on the Paragon. I would have taken it out again today but rain meant the Swift went instead. It’s rarely a good idea to ride in the rain after weeks of dusty trails, all that dust turns into a sticky paste that doesn’t let go of anything. By the end the bike had to be washed in the river on the way back it was so muddy. The last few times I’ve had more than one main bike there has been one clear favourite for whatever reason, that meant the other didn’t get ridden much. The good news is that I still like the Swift, there’s no clear favourite in my mind.
Climbing
The Paragon is a very good climber, particularly on technical climbs where there are rocks and roots to get past. The 51mm offset fork is said to boost low speed steering quickness so that helps. A few things seem to hold the Paragon back in terms of accelerating, climbing and rolling compared to the Swift. Firstly the Paragon is quite a bit heavier, secondly it doesn’t have 180mm cranks and thirdly the brakes and hubs drag more. Lighter 180mm cranks will help the climbing, accelerating and weight.
Descending
Thanks to the Fox fork, high volume tires and 29in wheels this is a very smooth and stable descender. Actually this bike goes over rough sections that would send me over the bars on most bikes without anything more than a little chain rattle.
Stiffness
Fork and front end stiffness is much better than any other 29er I’ve ridden. The BB and chainstays seem really solid under pedal input. All that stiffness and yet the rear end doesn’t feel anywhere near as harsh as I was expecting given my experiences with other aluminium hardtails. It’s definitely not as springy or compliant as steel but still pleasant enough.
Tire/mud clearance
The hydroformed asymmetrical chainstays are built to take tires right up to 2.5in apparently. Also there’s no cross bridges on the chain/seatstays which helps stop mud from stacking up.
Grips
Before the ride I installed my second set of Ergon GP1 Leichtbau grips, they made a major improvement. Strangely I ordered and paid for the Team Green version, what turned up from Chain Reaction Cycles was the ordinary black version. It’s obvious where they went wrong because the packaging is mislabelled. Perhaps CRC or the UK Ergon distributor need someone to personally check orders are correct as they made multiple mistakes with my first Ergon order earlier in the year. CRC will get away with it this time because the black grips actually look better on the Paragon. 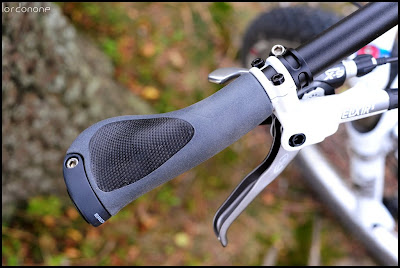 The way too narrow 640mm Bontrager handlebar
This has now been replaced by a 700mm Truvativ Stylo World Cup Single Speed Bar with 9dregrees of back sweep. When ordering the handlebar and grips from CRC I was going to get a shorter stem too but changing one thing at a time seemed like a good idea. In fact it was a very good idea because that extra 6cm in bar width made all the difference. Perhaps it has something to do with the G2 geometry fork but the steering feels just fine with the 105mm stem. That offset fork also has another advantage, the Paragon is the first 29er I’ve ridden where it’s impossible to hit my foot on the tire. 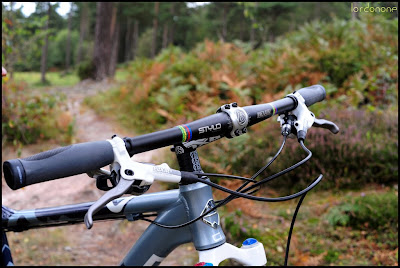 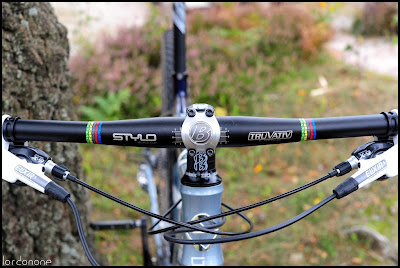 Avid brakes
The Elixir 5 rear brake was buzzing/vibrating so much there was no power at all. After tightening all the bolts I could find in the area most of the buzzing/vibrating disappeared. Perhaps the rest of the buzzing/vibrating will clear up with a little more break in time. The rear brake mount/dropout on the Paragon has to be one of the most heavily overbuilt one piece jobs I’ve seen so perhaps that has something to do with it.
Sram X.9 shifters
The main shift levers were pressing against my thumbs a lot so I moved the shifters onto the second clamp bolt. That’s a nice design feature, although Shimano shifters are in the right position to start with for me.
Bontrager wheels a tires
Just noticed they’re both tubeless ready…nice. So far the XDX 2.1in tires are fast rolling and grippy but the real test comes when the autumn mud arrives. 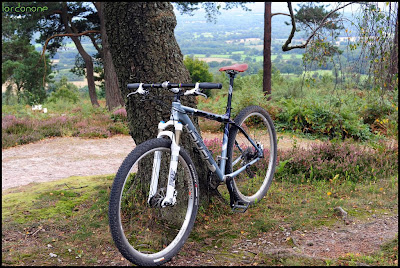 I’ll keep uploading photos to this set on Flickr.

Hi, what kind of pedals are you using? I just bought a new Paragon and am ready to start upgrading it. thanks!

Have fun with the new bike! The pedals are Kona Wah Wah flats...review here:

I have the exact same bike in XL. I'm considering upgrading the cranks to 180 as well. Which would you upgrade to? I'm considering either XT or XTR, but at 2X the price, the XTR is at the upper limit of my price range and would limit other upgrades. Any advice?

Can’t believe I missed your comment for so long. You’ve probably made a decision by now but I got the XT cranks and they’re great. The difference between XT and XTR cranks doesn’t seem enough to justify paying twice as much for XTR.