My new SS bike and the poll results…

Sram: 9 votes
Shimano: 13 votes
Internal gear hub: 3 votes
Singlespeed: 5 votes
The poll wasn’t exactly fair because I allowed you to vote for more than one option but it’s never the less interesting to see what you guys are using. I’ve used Sram gears, but unfortunately found their gearing is very unreliable. Newer Shimano gearing is much more reliable and feels quicker and more positive than older Shimano components while still not giving the OTT mechanical feel of Sram.
Singlespeed bike
Yep, I’ve dragged my old Cannondale M600 out of a large pile of bike wreckage. The original stem appears to have vanished so I found one on eBay, it’s a bit long but I’m sure it will do the job fine, it looks rather nice too. The only spare seat post that fitted the frame was my old purple one, luckily purple seems to be making a comeback these days. I also dragged out an old set of Araya wheels and rebuilt the hubs. The headset needed a rebuild before it would even turn properly. A new Sram SS chain, freewheel and chainring were also required and those pedals are less than ideal so I might swap them for something on one of my other bikes. So far I’m pleased with the ride of it. The gearing ratio seems to be just right. If I like it enough I may get a slightly more impressive SS bike in the future. 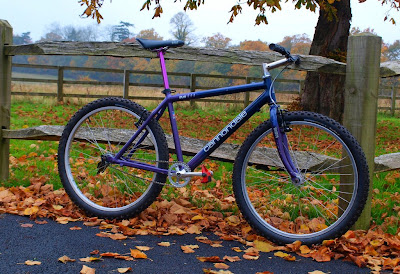 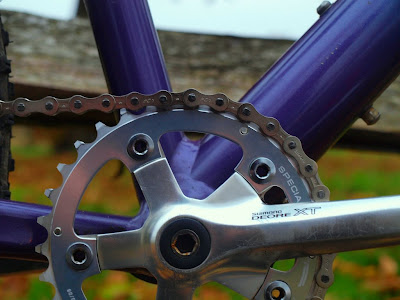 Personally I love SRAM and their fit and forget setup. I also love the "definite" gear change and audiable "click".

Shimano require to much tinkering and have changes that seem to buttery and "vague".

Interesting too that Shimano now route cables directly into their rear ders and have done away with the "knuckle" that slapped the rear stay like all hell. SRAM have had thsi setup for ever.

Love shimano brakes, cranks, front der and other gear- but not shifters.

The feel of the shifters is obviously something that comes down to personal preference. Shimano are harder to set up and if you use the Shadow RD it will be even harder but I think it’s worth it to get them set up properly, I’ve never had to fiddle with them after, except when the cables go and that’s pretty rare. It’s how short the lifespan on Sram jockey wheels, shifters etc. that really bothered me.

XTR is a set a forget option too, put some Gore RideOn cables and you wont have to touch the derailleurs and shifters until you change the frame! You just need to take the time and care to set them up perfectly from the start. SRAM are much quicker to install and keep their tune a while too but yeah, not as bomb proof as Shimano.

I’ve only ever used Shimano and Jagwire cables, some sealed , some not, but I’d be really interested to try the Gore RideOn cables, everyone seems to swear by them.

I'm guessing you saw the news/teases about the new SRAM XX mountain group that's all over the news now... 2x10, the goal is to make it as light as the new Dura-Ace road group... Can't wait to see that.

I did indeed read about it, I have to say I thought XX was going to be a FR/DH groupset like Shimano Saint but clearly not. I’m really looking forward to seeing it though, and finding out just how durable it is if they keep to the weight that’s being claimed. Shimano should have a new XTR coming soon so it will be interesting to see which turns out better…