Apparently it’s the latest thing, well actually I’m pretty sure that I and the rest of the world have been doing it for years and some of us have moved up to rivers, riding bikes down waterfalls and even bog snorkelling with a bikes. Good ride today, I took the Trance X because my Trance is currently out of action, in fact I don’t think I’ve ever seen a hawthorn puncture that big. For the first time in months I finally managed to clear the climb on the steep side of Leith Hill Tower, which is the highest point on the North Downs for those who don’t know. It’s not hard to get up there, what’s hard is to get up there without stopping or being forced to stop by rocks or roots. I usually skip it and go the long way because the gears on my Trance don’t go as low as the TX, for various reasons the TX seems better for that particular climb. I was a bit worried that the lack of tea shop to entice me up to the top of the hill would slow me down but it didn’t and I was rewarded with just enough time to get back the car park before the rain and darkness really set in. 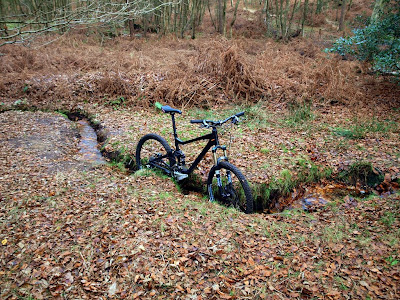