As you can see in the photo, the weather here over the Easter weekend has been an absolute joke. Thursday night a massive rain cloud swept into the UK, slowed down and eventually parked up over the south east, it literally stopped dead right over us and isn’t going to move until tomorrow afternoon. So all that wonderful dust that had been accumulating on the trails for weeks turned straight back to mud ready for the Easter weekend. The rain had pretty much stopped by today's ride but the cloud was still pretty low so visibility was poor up Leith Hill and I had to stop a couple of times to clear my glasses of water vapour from the fog. By coincidence the weather seems to be trying to put a few more nails in the coffin of my CB headset, now it’s creaking and squeaking with every movement and I think I can feel the occasional bit of sand grinding around in there from today’s ride. Before it was only feeling stiff and making a hissing sound when the wheel was turned, so stick around for the review, at this rate it should be coming very soon. Other than that the Singular still rides great and there was only two technical bits I couldn’t get it up(surprising around Leith Hill), one really was too steep but the other would have been fine without the mud. Even more surprising was the number of riders who came over to look and comment on the Singular while I was taking a tea and cake break at Leith Hill Tower. There seems to be loads of interest in the Swift, I’ve never had more than one rider come over to look before, let alone four in a ride. 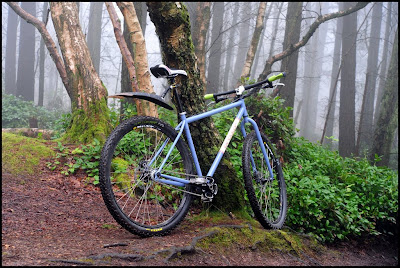