I’m sure I’ll look back on this post in a few of years and think “What a pile of rubbish”...such is the speed of product development in the cycling industry but these are a few new bikes and components that have attracted my attention over the last few days, mostly from the Sea Otter Classic.
Firstly a prototype 2010 Giant Reign X
It has 6.7in rear travel, Maxle thru axle on the rear, loads of tube shaping, weighs under 30lbs with no carbon in sight and has a tapered head tube. It also has down tube cable routing, a rearward facing seat clamp, what looks like another very long head tube from Giant, a poorly placed strut between the seat and chain stays and a seat tube without a full range of height adjustment. In other words I can still see a lot of negatives that Giant could easily fix if they took a few ideas from others, namely Scott for the seat tube and Santa Cruz for the rear suspension strut. It doesn’t look much in a small size with a weird saddle but I’m sure it will look a lot better when we see the final product. 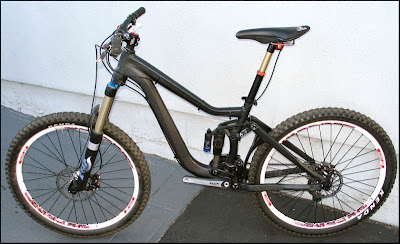 Rocky Mountain 2010
So far I’ve found photos of a new 29er Altitude, Vertex and a few prototype DH bikes. The 29er Altitude it pretty similar to the 26in version with the same Straight Up geometry but is yet another bike to get the tapered head tube treatment. 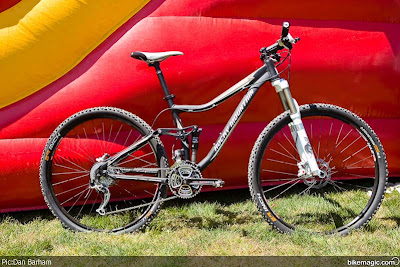 Sram
They won’t be showing off the final X.X stuff that has been spotted on a few racers bikes recently until May but their other new offerings were on display. All the new colour options and Stylo stems look very nice, the white one is calling to me… 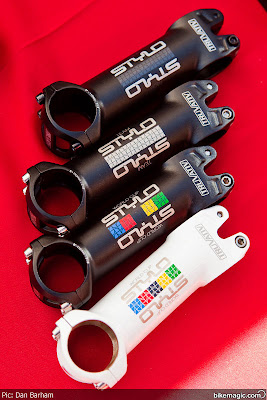 FSA
They had some very smart new 2X9 BB30 and Mega Exo cranks on display with only three chainring bolts but do we really need another component standard like 3 bolt chainrings? Anyway, the rumours of new DH flat handlebars seem to be true, I’ve recently become a fan of bars like these so I'm very interested to hear more about them.
Race Face
They seem to be going to long lengths to get the shifting as good as Shimano, just check out the new rings... 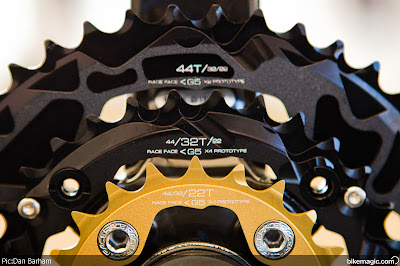 I’m not sure I like the new black and gold graphics on most of their 2010 stuff yet but I suppose black and red was getting a bit old with far too many manufacturers using that combination. Also the new Altas crank colours do look very nice even if they did spark about 90 posts of Race Face hate on Mtbr… 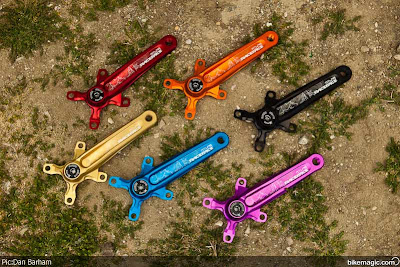