The Swift recently received some long awaited attention after nine months of the same setup and very little maintenance:
- The Sun Ringle hubs are now as smooth as butter thanks to a cleaning, freehub greasing and new bearings. Makes a nice change after quite a few rides starting off with the hubs seized solid.
- The Eccentric Bottom Bracket also seized solid, requiring several taps with a hammer and a greasing before the chain could be tightened properly.
- Bash ring removed and shorter chainring bolts installed.
- Brake levers oiled to stop them creaking like crazy.
- Crank Brothers headset replaced with a Hope, see the review for reasons why.
- Singular fork replaced with a Niner Carbon for the 1.38lb weight loss and a slight increase in braking/steering stiffness. I think the “Nude Carbon” looks great even though it doesn’t match the frame too well. The weight difference is very noticable while riding. What hasn’t been particularly noticeable is the ride becoming any harsher than it was with the steel fork. 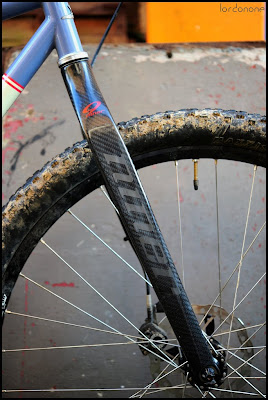 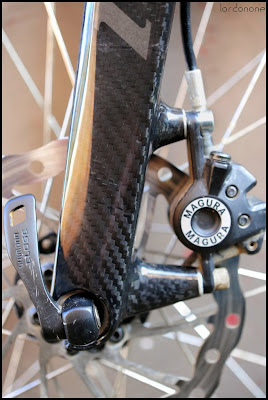 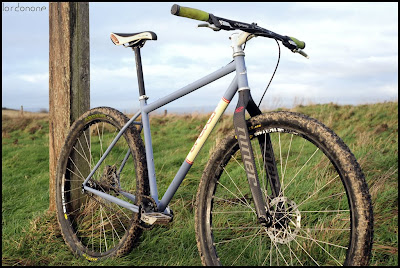 Next…well, the bottom bracket bearings are starting to get a little rough and the seatpost belongs on another bike.

I'm tempted by a Niner fork for my ti29er; can't decide if it's worth the extra ££ over the On-one fork though! Looks nice on the Singular, although it's a shame it's not ok with 180 rotor.

How are you getting on with the Maguras?

Can’t say I’ve ever felt the need for a 180 rotor on a rigid singlespeed but it probably depends what brakes you’re running. Stif has a 20% discount on the fork at the moment.

The Maguras are great, oiling the levers is the only maintenance I’ve done on them. I posted a review here: http://lordonone.blogspot.com/2009/07/2009-magura-julie-hp-brake-review.html

The Niner forks are one of the prettiest out there. I ran into a guy in Fruita, CO that had been riding one and he claimed that it was astoundingly rigid. I guess that could be good or bad. @ Muddy trail, why not dish out for the Sibex Ti fork? I suspect that if someone made a Ti fork with the shape of the Niner carbon it would fly like hotcakes.Cheers.

It feels stiffer while steering or braking, but slightly more comfortable going over roots and stuff than my Singular Reynolds 520 fork. A Ti blade fork from Niner would be very interesting indeed!

A fine choice…the best rigid fork on the market at the moment!

So 2 years after promising I finally got one. Stif did me a good deal at £320. Tried it yesterday. More compliance as expected. Excellent quality. Lovely.

Looks very nice! Have you weighed the bike Robin?