The idea
Crank Brothers took a standard headset licensed from Cane Creek and removed the outer race. Instead they machined the cups to serve as the outer race. Running the 28 steel balls directly against the cups rather than having an outer race between the cups and ball bearings. This remarkably simple idea removes enough material to get the weight down to 65g and allows for a more compact design (22.56mm stack height).
Upon arrival
The packaging looked very nice, as does pretty much anything they do, from adverts to the products themselves. However, the box states a 5year warranty and yet the instructions state a 2year warranty with little info in what that covers. 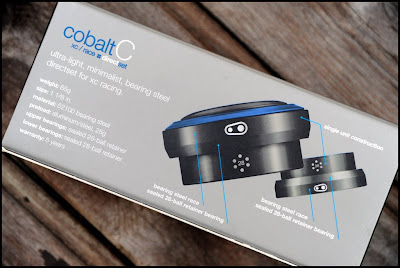 Installation
Several reviews on other sites have suggested that it’s hard to stop the headset from turning sideways as it’s being pressed in. So I had a proper mechanic do it, sure enough it turned sideways during the first attempt. Even after giving the head tube an extra reaming, setting the cup with a mallet and pressing in one cup at a time, the upper cup still tried to turn sideways. But eventually it straightened out and went in properly. It seems this happens because Crank Brothers decided to manufacture their headsets with a slightly larger outer cup diameter than other companies like Chris King. Not by much…but enough to make it turn sideways sometimes, occasionally crack the cup or even in rare cases crack the head tube itself.
Out riding
- The fork steerer installed fine but was rattling in the headset by the end of the first ride. Tightening the star nut/top cap bolt enough to stop the fork rattling resulted in the bearings making a hissing sound and being hard to turn. It would appear that Crank Brothers Directsets are particularly susceptible to being squeezed by pressure from the top cap. The bolt can be cranked right up to breaking point on my other bikes without the slightest effect on the bearings. I think Crank Brothers needs to work on stopping the bearings from being so easily squeezed and also on a design that results in a lot less headset play.
- After the first slightly wet ride the bearings were creaking and squeaking with every movement and I could feel and hear dirt grinding around in them. One wet ride and the bearings felt and sounded like they had been through an entire winter of use. So the headset was stripped apart, cleaned, very well greased and put back together. There was very little grease in the bearings to start with…one of the dirty tricks that manufacturers seem to be trying to get away with these days. So giving the bearings a proper greasing allowed the top cap bolt to be tightened without stopping the bearings from turning freely. However, the bearings still weren’t amazingly free, nor was the headset play gone completely. 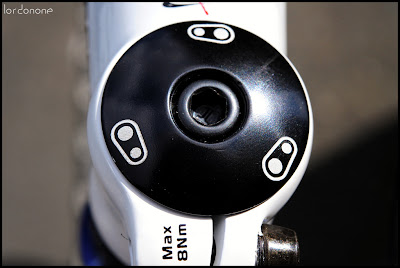 - The lower seal was ridiculously loose and actually dropped off the crown race several times. This was replaced with a much tighter lower seal that mostly stayed put. There’s nothing to actually hold the seal in position so it still dropped off sometimes and isn’t tight enough against the lower cup to be effective at its job.
- Specks of rust have been appearing on the outside of the cups. £80 headsets shouldn’t start developing specks of rust after the first outing in light rain. Both cups have rust just like this all over them. Looking closely reveals many more dark brown areas that might look like mud, but are actually more areas of rust developing. The back of the lower cup is completely covered in rust. 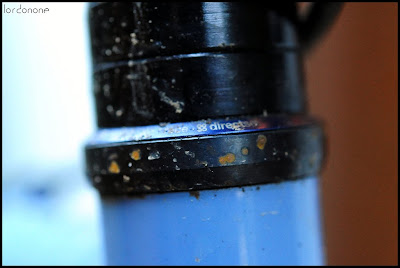 - A particularly wet ride last Sunday resulted in the poorly sealed bearings descending back to creaking, squeaking, grinding and crunching with every movement. I might have to grease the bearings again before funding for a new headset is available.
Final word
The majority of riders using Crank Brothers Directsets have had no problems, but far too many are reporting exactly the same ones as me. I won’t lay into Crank Brothers too much but their other products aren’t up to much either. At this price, it would be a long and hard search for a product any worse than the Cobalt C. 19/12/09: The Cobalt headset has been removed and replaced with a Hope headset, which has already proved to be much better in several ways. 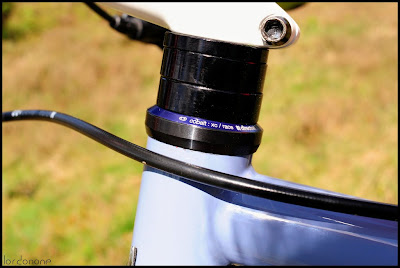 I just don't buy any CB stuff no more. It is all JUNK.

I love my egg beaters. I have them on all my bikes. This looks and sounds pretty poor though!

I run a Cane Creek S8 on my Morewood and it's been flawless from day one and is as smooth now as it was nearly 3 years ago when I fitted it..
I managed to pick mine up for £24 new after some internet trawling.

After wrecking an Aerozine headset on my Patriot, I recently installed a Sunline V-One DH headset. It's quite different from any other headset that I've used and it took a fair bit of persuading to fit, but it feels indestructible.

Jeff
Never tried Egg Beaters but don’t get me started on the Candy C or 5050 pedals :)

Inchy
I’ll be looking at all of the available options, from King to Reset and Syncros…will be interesting to see if I can make another mistake.