The rear Avid Elixir 5 brake on my Paragon has been vibrating so much its been almost unusable since I got the bike. The vibrating makes an awful sound and removes nearly all of the braking power. Only when riding very slowly or when the rear brake is really hot does it work correctly...so hardly ever. A few riders on Mtbr who were experiencing similar issues with their Avid brakes tried adding lead weights to the calliper and seemed to have some success with the idea. So I stuck four pounds on the calliper and went out for a ride to see if the idea works. The added weights have more or less fixed the problem. Hopefully the idea can be refined a bit, firstly because I want my money back and secondly because the rear brake still vibrated once or twice during the two rides so far. If added weights don't totally fix the problem then I will try some other ideas and if all else fails, return it to my LBS. 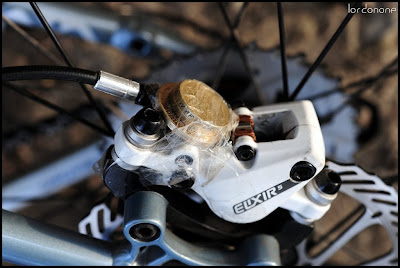 do you reckon the brakes might heat up enough to melt the sticky tape? might be a bit messy

Ha-ha, wouldn’t want that to happen!

I think there could be two reasons causing the vibration:
- the pistons need a reset and the calipper needs a very precise re-installation.
- the rear triangle of the frame isn't rigid enough and the self-frequency of the frame is nearly the same as the vibration caused by the brake making eachother stronger.

a (never tried but possible good) solution could be: try to use shims between the calipper and the adapter. if the pads don't drag on the spokes of the disc, maybe the vibration will be weaker or none.

this has been going on with avid brakes for years- and people keep complaining and trying to fix it.

The solution is to not use avid brakes. Fixed.

I agree with you Paul, noise/vibration problems are very common with Avids but other brakes don‘t come with a guarantee that they won‘t have the same problem. While I would never go out and buy Avids, they come on so many bikes it would be very hard not to end up with them on a bike sooner or later. Seeing as they came on the Paragon I thought it would be a good idea to look at what others are doing and try to fix the problem. Rather than throwing £250 worth of brakes in the bin and hoping their replacement works properly. In this case the adding weights idea appears to work for me.

Keresz, all useful info and I’ll bare it in mind.

I hear you mate- and of course if they ship with the bike- what can you do?

I'd take them back to the shop to be honest and get them to sort it out.....as you should not have to fix up a new set of brakes. Riding around with money sellotaped to the calipers is not really a solution is it? lol

I know that no brakes make a guarantee to not make a racket- but Avids seem to be the leader when it comes to this issue. I've owned several brakes form Avid- and not had issues...... funny eh.

Yeah, the money and sellotape will go, I’m working on something more permanent and less noticeable.

I may well mention the problem when the bike goes in for new cranks and see if they have any ideas.