Conditions weren’t ideal for riding after three days and four nights of rain, wind, several thunderstorms and a few hailstorms. Every so often a new component gets installed on one of my bikes and I just have to try it out at the first opportunity. The new component on this occasion was a Shimano XT chainset for the Paragon. Allow me to list a few of the benefits:
- An XT chainset weighs 853g, so according to my calculations that’s 100g less than the FC-M542 that came on the bike, but add a little more back on because I went for the 180mm option.
- The look of the bike has been improved no end.
- 180mm crank arms give more leverage, a smoother crank rotation for my long legs, no knee pain and still leave plenty of toe/wheel clearance due to the excellent G2 geometry.
- A rather annoying knocking sound that happened with every left pedal rotation on the old chainset has vanished.
- Slightly better shifting and hopefully less chain suck, I’ll have to get back to you on that last one after more riding, though. 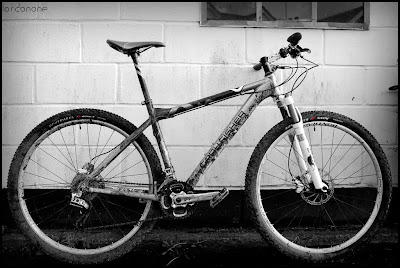 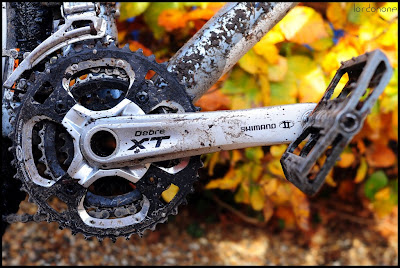 My only riding jacket suffered a serious zip failure moments before I set off which required immediate retrofitting of a newer and stronger zip from one of my other jackets. The ride itself was pretty good considering the amount of puddles on the trails, even after a surprisingly deep one that nearly reached the front hub. Eventually the water, mud and sand had the drivetrain making sounds rather like a vintage paint mixer. Quite a few fallen branches and rocks uncovered by the rain up Leith Hill this morning needed jumping or avoiding but that just adds to the fun. The clear sky and low but bright sun didn't really help photography up there today, the bikes ended up too bright and backgrounds too dark. So most of the photos were unusable, hence the above photos taken elsewhere later in the day. On my way back up to the Tower for tea and cakes I spotted the Muddymoles leaving. Somehow I never seem to arrive at the top while they‘re still there, timing needs to be improved. On the return journey the rear brake felt like it had lost a lot of its power. I really hope this doesn’t turn into a major brake pad problem like the 08 XTs on my Stumpjumper. Even two years later I have no idea what caused every set of pads I put in there to die and haven’t managed to replicate the problem on any other brakes…yet!

I spent £70 on body armour, £30 on new brake pads, then a further £32 booking myself onto Sunday's Uplift Day at Innerleithen, only to have to phone my friends on Saturday afternoon and pull out when the severity of the flu I currently have becomes apparent.

Fast forward to mid-morning on Sunday and my phone rings:
"We're on the uplift bus heading up for our third run" I'm told, "That's great" says I "I feel much better now, thanks!".
"We're sitting with Steve Peat and Josh Bryceland!" says my so called friend! "He shook my hand!!!"

Damn you flu virus, damn you all to hell!

Matt (from the Muddymoles) said...

Hi LordOnOne, thanks for the link back to us. Shame we missed you, we're getting quite familiar to your old man these days!

Great pics on the site and love the writing which is always engaging - not an easy trick to pull off.

See you on the trails soon etc., Matt

Thanks for the kind words Matt.